Rosemary or Rosemarinus officinalis – Also known as Dew of the Sea, Sea Dew, Incensier, Rosemarine, Ros Maris, Rosemarie, compass plant and Guardrobe –  is a woodsy perennial with fragrant, evergreen, needle-like leaves and white, pink, purple, or blue flowers, native to the Mediterranean region. It has a proclivity to grow in warmer regions and thus will release and hold  a small amount of its essential oils to its leaves to contain the precious moisture within.

Antiseptic; Antispasmodic; Aromatherapy; Aromatic; Astringent; Cardiac; Carminative; Cholagogue; Diaphoretic; Emmenagogue; Nervine; Stimulant; Stomachic; Tonic. Rosemary is commonly grown in the herb garden as a domestic remedy, used especially as a tonic and pick-me-up when feeling depressed, mentally tired, forgetful or nervous. Research has shown that the plant is rich in volatile oils, flavonoids and phenolic acids, which are strongly antiseptic and anti-inflammatory. Rosmarinic acid has potential in the treatment of toxic shock syndrome, whilst the flavonoid diosmin is reputedly more effective than rutin in reducing capillary fragility. 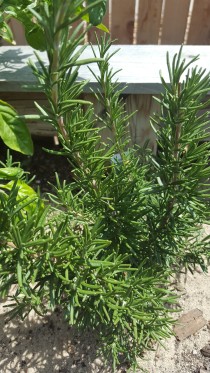 Rosemary is an excellent remedy for headaches, either taken as an infusion (in tea) or applied topically, or the essential oil used in aromatherapy. It improves the circulation, strengthens fragile blood vessels and eases painful cramping. This amazing herb reduces flatulence and aids in digestion by stimulating the smooth muscle of the digestive tract and gallbladder. It has been known to lower high blood pressure with 1 to 2 cups infusion each day. This action also helps the mind assisting memory and focus.  It is also wonderful in liniments for arthritis and rheumatism. Massaging the body with rosemary oil will increase circulation, relieve aches and pains and warm the limbs. Used as a skin toner, rosemary will help bring blood to the surface of the skin and act as an antiseptic and astringent

The word Rosmarinus is from the Latin meaning “dew of the sea“.  It has connections with the sea and is used in all sea rituals as well as in sachets designed to ensure a safe, easy passage on the water. Rosemary is useful for ritual baths and for making sacred herbal water for ritual cleansing, blessing and purification. Bathing in rosemary will enhance your memory and will make you more memorable to those you meet throughout the day. Thus historically, Rosemary was used as the herb of fidelity for romantic relationships. Rosemary can be used in spells for fidelity and remembrance as well as to dispel jealousy. It is known in lore as a plant of protection and was used above the child’s cradle to prevent thieving Faeries, as well as in religious rituals and exorcisms of all kinds. Finally, rosemary is known to have been one of the herbs used in the 4 thieves story, protecting them from succumbing to the plague.